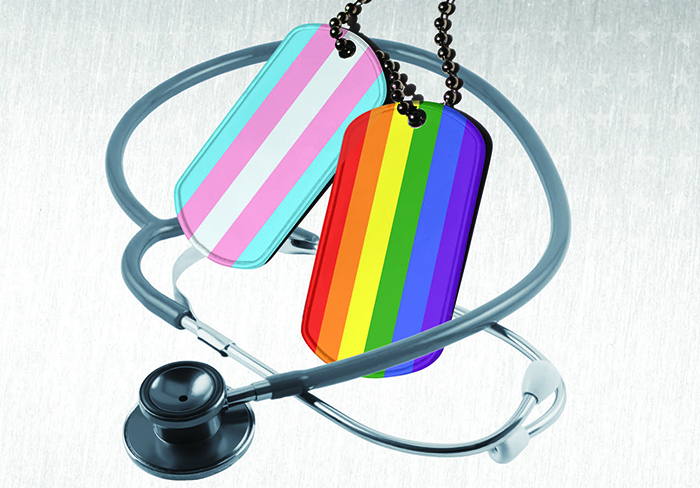 June is PRIDE Month, and VA takes pride in striving to improve the health and healthcare for LGBTQ Veterans. Sexual and gender minority Veterans have faced stigma and discrimination, which can affect health, so VA is working to make sure that LGBTQ Veterans know they are welcome within the VA healthcare system. This is important because there are an estimated 1 million lesbian, gay, bisexual, and transgender Veterans in the United States.1 Further, compared to their heterosexual and non-transgender counterparts, LGBT individuals are especially likely to have higher rates of depression, PTSD (post-traumatic stress disorder), suicide ideation and attempt, alcohol misuse, and smoking.2

HSR&D continues to contribute to VA’s mission to provide optimal care to all Veterans, including Veterans with LGBTQ identities. For example, investigators with HSR&D’s Center for Health Equity Research & Promotion (CHERP) are working on an interactive disparities dashboard that was developed in partnership with VA’s Office of Health Equity (OHE) to identify racial/ethnic, sex, and/or rural/urban disparities in VA quality measures at all levels of the VA healthcare system. The following studies represent a few of the HSR&D-funded research dedicated to the health and care of LGBTQ Veterans.

Health Outcomes and Healthcare Use among Transgender Veterans

Transgender individuals bear a high burden of health disparities, and almost 20% of transgender adults have served in the military, which is more than twice the prevalence in the general US population. Recognizing the need to serve transgender Veterans, VA disseminated expectations for transgender healthcare. However, limited information exists about transgender Veterans receiving VA care.

Study findings are expected to increase visibility and awareness of transgender health in the VA healthcare system. In addition, the cohort data derived from this project will provide a foundation for intervention research to reduce disparities. Further, through an operations partnership with the LGBT Program in the Office of Patient Care Services, results can be expeditiously disseminated throughout VA and added to existing transgender health resources for VA providers.

The causes of suicidal behaviors may consist of a combination of factors, which vary over time, and between individuals and groups. Despite literature on suicidality among lesbian, gay, bisexual, and transgender (LGBT) persons, little research has examined LGBT Veterans. VA's Evidence Review: Social Determinants of Health for Veterans found “only two articles examined sexual orientation for Veterans and non-Veterans and included only women. No articles addressed gender identity for Veterans and non-Veterans.” In addition to LGBT status, there is less study of other suicide risk factors, such as pain and opioid prescriptions, as well as potential protective factors such as the receipt of complementary and integrative health services, which may treat both pain and PTSD.

Using VA electronic health record data, investigators in this ongoing study (June 2019 – May 2023) will identify LGBT Veterans to ascertain pathways to suicidal behavior, and to assess both risk and protective factors related to LGBT individuals in all gender, age, and racial and ethnic groups. Specific aims of this study are to:

Results of this study will expand our understanding of potential areas of unmet need and outreach to all individuals at risk for suicide. Next steps will include an examinations of service(s) use after policy changes and VHA directives, such as repeal of DADT (Don't Ask, Don't Tell, 2010) and DOMA (Defense of Marriage Act, 2013), and VHA Directives 1340 and 2011-024, using VA data to examine differences in satisfaction with care, and needed data on differences in outcomes of care for LGBT Veterans.

Lesbian, gay, bisexual, and transgender (LGBT) individuals have been identified as being at risk for health disparities by the Institute of Medicine. Compared to their heterosexual and non-transgender counterparts, they are especially likely to have higher rates of depression, PTSD, suicide ideation and attempt, alcohol misuse, and smoking. The available data also suggest that LGBT Veterans experience a high burden of mental health problems and health risk behaviors, though studies have most often failed to examine differences by gender (combining women and men) or sexual identity (combining gay/lesbian and bisexual), and data on some sub-populations (e.g., gay and bisexual men) are extremely limited. Further, few studies have examined the risk and protective factors that may explain these disparities, or LGBT Veterans’ experiences with and preferences for treatment. This ongoing study (April 2019 – March 2023) aims to:

Results of this study should improve our knowledge about the extent of existing health disparities, the risk and protective factors associated with them, and treatment preferences of LGBT Veterans. They also will provide critical information for future prevention and intervention efforts for this stigmatized and highly vulnerable group.

Principal Investigator: Karen Lehavot, PhD, MS, is with HSR&D’s Center of Innovation for Veteran-Centered and Value-Driven Care, in Seattle, WA and Denver, CO.

Transgender individuals experience discord between their self-identified gender and biological sex, defined as gender dysphoria (GD). Untreated and/or undertreated GD is associated with increased mortality and morbidity including depression, anxiety, and suicidality. Hormone therapy is generally the first, and often the only, medical intervention accessed by transgender persons with GD who seek to masculinize or feminize their body to be consistent with their gender identity. This ongoing study (April 2019 – March 2021) seeks to:

This study will be the first to provide an assessment of the quality of hormone therapy care received by transgender Veterans served by VA, as well as to refine methods to identify transgender persons on hormones in VA data. In addition, this study will lay the groundwork for a follow-up qualitative study to identify best practices associated with the delivery of guideline-concordant hormone therapy care in transgender Veterans.