Fecal Microbiota Transplantation for Clostridium Difficile Infection: A Systematic Review of the Evidence 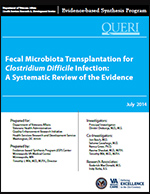 Fecal Microbiota Transplantation for Clostridium difficile Infection: A Systematic Review of the Evidence

Since its discovery as the cause of pseudomembranous colitis in 1978, Clostridium difficile (C. difficile) has become an increasingly important pathogen. Initially, C. difficile infection (CDI) was largely confined to patients with healthcare exposure; however, it is now also affecting those with no or limited contact with the healthcare system. In 2013, the U.S. Centers for Disease Control and Prevention placed C. difficile into its top threat category of "urgent" in its first threat report on antimicrobial resistance.

A major challenge in treating CDI is the high rate of recurrent disease. Recurrence occurs in 15-30% of patients, and among those with a single episode of recurrence, the risk of further recurrence increases after each episode. Multiple treatment/recurrence episodes can result in repeated hospitalizations, clinic visits, deconditioning, malnourishment, and fecal continence issues. These effects are debilitating, contribute to decreased quality of life and prolonged courses of antimicrobial treatment and rarely can be fatal. Antimicrobial treatment for these episodes of recurrent disease yields reported success rates between 30% and 80%, depending on the number of recurrences, and on the agent and duration of treatment selected. These suboptimal response rates have helped spur the investigation of additional therapeutic options including fecal microbiota transplantation (FMT) for the treatment of CDI.

CDI is characterized by severe alterations in the colonic microbiome (normal colonic bacteria). Restoring the normal microbiome has been proposed as a method for preventing recurrence. The most widely utilized intervention has been probiotics yet these products provide only a limited number and diversity of microorganisms. Fecal microbiota transplantation is increasingly utilized as a treatment for patients with recurrent CDI; based on the idea that to restore all the organisms that comprise the normal colonic flora, simply import the colonic microbiome of a healthy person. FMT has been performed in hundreds of patients, with outcomes from more than 500 cases reported in the medical literature - most in non-controlled case series. Reported success rates of up to 100% and the recent publication of a randomized controlled trial (RCT) comparing FMT to antimicrobial treatment have increased interest in the procedure.

The key questions for the review were:

Key Question #4: What are the harms of fecal microbiota transplantation therapy compared to standard therapy for initial, recurrent, or refractory CDI? Do the harms vary by method of transplantation?

Key Question #5: Is the procedure acceptable to patients? Does patient acceptability vary by method of transplantation?