HSR&D Home » Publications » Esp  » The Effectiveness of Procedures to Remove or Occlude the Left Atrial Append... 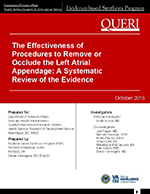 Atrial fibrillation (AF) is the most common cardiac arrhythmia, affecting between 2.7 and 6.1 million people in the United States. The prevalence of AF increases with age and is often associated with structural heart disease and co-morbidities that are common in the Veteran population. AF is the most important cause of cardioembolic stroke, which accounts for 14-36% of all ischemic strokes. While patients at highest risk for AF-related stroke also often have other independent risk factors for stroke secondary to atherosclerotic aortic or carotid disease, most cardiac sources of embolism are thought to be due to thrombus formation from blood stasis in the left atrium. Among patients with non-valvular AF more than 90% of thrombi develop in the left atrial appendage (LAA). Antithrombotic therapy with aspirin, warfarin, or one of several newer oral anticoagulants reduces the risk of stroke due to both atrial fibrillation and atherosclerotic disease but is associated with a risk of serious bleeding. As a potential alternative to long-term anticoagulant therapy, various LAA exclusion procedures have been developed in an attempt to isolate the LAA from circulating blood flow. These procedures, including both surgical occlusion and removal of the LAA and percutaneous catheter-based interventions to occlude the LAA, may be beneficial in reducing risk of cardioembolic stroke originating from the LAA.

The purpose of this report is to systematically review the literature to better understand the balance of benefits and harms of surgical or percutaneous LAA exclusion procedures.

KQ1.What is the effectiveness of surgical or percutaneous LAA exclusion compared with usual care?

KQ2. What are the harms associated with surgical or percutaneous LAA exclusion?

KQ3. How do the benefits and harms of LAA exclusion vary in different subgroups?

KQ4. What are the comparative effects of different techniques (surgical and percutaneous) of LAA exclusion on rates of procedural success?

The Effectiveness of Procedures to Remove or Occlude the Left Atrial Appendage: Systematic Review (Management eBrief)