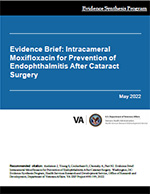 Endophthalmitis is a rare, serious infection of the eye that can lead to permanent loss of vision. Topical antibiotic eyedrops are often prescribed to prevent endophthalmitis after cataract surgery, but their efficacy is unclear, and there are also concerns about patient adherence to regular use of drops in the postsurgical period. Intracameral antibiotics, which are administered only once at the end of the surgical procedure, may be effective and provide advantages over topical drops.

A meta-analysis of 14 comparative studies (3,566,022 eyes) found that intracameral moxifloxacin use is associated with a 73% reduction in odds of endophthalmitis compared to standard care (OR = 0.27, 95% CI [0.19, 0.40], p < .0001). Standard care often included postoperative topical antibiotics and/or corticosteroids in both intervention and comparator groups. Intracameral moxifloxacin also appears to be safe at the dosages and preparations reported in the studies, with no studies reporting adverse events directly related to moxifloxacin use.

These findings align with previous systematic reviews, with an additional 9 studies not included in previous reviews. However, the studies are limited by study design and methodology, with a single randomized controlled trial reporting endophthalmitis rates among the included studies. Additionally, no studies were conducted in the VHA and only 4 studies were conducted within the US, potentially limiting the applicability of these results for intracameral moxifloxacin use within the US.