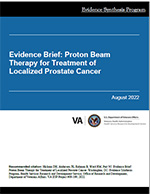 Prostate cancer is the most diagnosed malignant disease among Veterans, and many men choose radiation therapy for initial treatment. Radiation therapy options for prostate cancer include external beam photon therapy, brachytherapy, and PBT. Evidence from direct comparisons of these modalities has high potential value for guiding treatment choice. This report updates a 2015 synthesis of evidence on the benefits and harms of PBT compared to other radiation modalities for treatment of localized prostate cancer.

From 477 potentially relevant articles, 47 studies reported outcomes of treatment with PBT. Ten studies rated as low risk of bias compared PBT to contemporary forms of photon-based radiation therapy. Evidence from 3 studies examining initial treatment of prostate cancer suggests that risk of early GI and GU toxicity is possibly lower after PBT compared with IMRT. Results of 4 studies suggest that in the first year after treatment, GI toxicity risk may not differ between modalities, while GU toxicity risk is possibly lower after PBT compared with IMRT. No pooled findings were statistically significant, and evidence was rated as low strength. Low-strength evidence also suggests that PBT and brachytherapy confer similar overall survival rates, and that GI and GU toxicity rates are similar for hypofractionation and conventional dosing. Single studies reported on quality of life, second malignancy, and overall survival, and it is unclear whether PBT and IMRT differ in these outcomes.