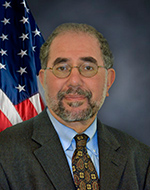 Dan R. Berlowitz, MD, MPH, is the recipient of the 2015 Under Secretary's Award.

Dan R. Berlowitz, MD, MPH is the recipient of the 2015 Under Secretary's Award for Outstanding Achievement in Health Services Research - the highest honor for a VA health services researcher. Dr. Berlowitz is a leading health services researcher and former Co-Director of HSR&D's Center for Healthcare Organization and Implementation Research (CHOIR) - HSR&D's largest Center of Innovation, located in Bedford and Boston, MA. From 2004 to 2013, he served as Director of HSR&D's Center for Health Quality, Outcomes and Economic Research. Since 2012, he also has served as Acting Chief of Staff for the Edith Nourse Rogers Memorial VA Hospital in Bedford. Dr. Berlowitz has met the major criteria for this award by:

Dr. Berlowitz earned his MD from the Albert Einstein College of Medicine in Bronx, NY, and received his MPH from Boston University School of Public Health. A former HSR&D Research Career Development Awardee (CDA), his research relies on strong methodological expertise in the areas of quality assessment, risk adjustment, and the use of large databases. His work focuses on assessing and improving the quality of healthcare for Veterans, with particular emphasis on ambulatory and long-term care settings, and he has made significant contributions in both of these areas. For example, he conducted the first study to document the use of risk adjustment in long-term care, published in the Annals of Internal Medicine (Berlowitz et al, 1996). This risk-adjustment model was adopted by VA's Office of Quality Management and was used in its profiling of VA care. As an early advocate of using large databases for assessing the quality of long-term care, Dr. Berlowitz also set the stage for the current use of quality indicators based on the Minimum Data Set. His work on guidelines and quality improvement also led to important changes in VA care. For example, Dr. Berlowitz examined the care of Veterans with hypertension and recognized what is now referred to as "clinical inertia" - the failure to intensify therapy when indicated. This study, published in the New England Journal of Medicine (Berlowitz et al, 1998), demonstrated that clinical inertia was common in hypertension management, that it could be measured, and that more intensive therapy was associated with improved blood pressure control. These findings led to a reevaluation of uncontrolled hypertension. VA responded to this work through a quality improvement initiative. Hypertension control rates are now well over 70 percent, in large part due to reducing clinical inertia.

This research expertise also extends into the clinical arena. Dr. Berlowitz writes about pressure ulcers for leading clinical resources, has advised VA on their policies and procedures for pressure ulcer care, has served for six years on the National Pressure Ulcer Advisory Panel (NPUAP), and recently developed an Agency for Healthcare Research and Quality (AHRQ) toolkit for preventing pressure ulcers in hospitals. In addition, Dr. Berlowitz has worked with more than 20 Fellows and Career Development Awardees on diverse projects, with many going on to successful academic careers. He also has been extremely supportive of trainees and junior investigators at several VA medical centers, including those in Atlanta, East Orange, Los Angeles, Providence, San Antonio, Tampa, and West Haven. In addition, he is a prolific author, with more than 170 publications.

For his dedication to improving the health and care of Veterans, Dr. Dan Berlowitz is highly deserving of the prestigious Under Secretary's Award for Outstanding Achievement in Health Services Research.