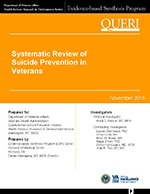 This systematic review updates evidence on the accuracy of methods to identify individuals at increased risk for suicide, and the efficacy/effectiveness and adverse effects of healthcare service interventions in reducing suicide and other suicidal self-directed violence. Important areas of ongoing research and current evidence gaps on suicide prevention are also addressed. This report includes studies relevant to healthcare services provided to Veterans and military personnel in the United States (US), and updates 3 previous Department of Veterans Affairs (VA) Evidence-based Synthesis Program (ESP) reviews on these topics.

Veterans and military personnel represent 20% of all known suicides in the US. Rates of suicide increased during the wars in Afghanistan and Iraq, and between 2000 and 2010, the suicide rate among Veterans rose higher than the rate among civilians. Female Veterans are at especially high risk relative to other women. These trends have led to new initiatives within the VA and military to address suicide prevention.

During the year prior to suicide, an estimated 77% of individuals make contact with primary care and 32% with mental health care clinicians, providing opportunities for suicide risk assessment and intervention. However, screening for suicide risk in general medical practice is not part of standard care in the US. Efforts to prevent suicide in individuals at high risk, such as those with recent suicide attempts, generally include treatment of underlying conditions and psychotherapy. In addition to individual-level approaches to suicide prevention, initiatives have been implemented at organizational, health system, and community levels. However, despite the existence of many types of services, very few studies demonstrating their efficacy and effectiveness have been published. As a result, their influence on suicide prevention remains unclear.

This systematic review is an update of previous VA ESP reviews that addresses the following key questions:

A) What are the accuracy and adverse effects of methods to identify Veterans and military personnel at increased risk for suicide and other suicidal self-directed violence?

B) Does accuracy and adverse effects vary by settings, delivery modes, targeted populations, or other factors?

What are the efficacy/effectiveness and adverse effects of suicide prevention interventions in reducing rates of suicide and other suicidal self-directed violence in Veterans and military personnel? Interventions include healthcare services directed towards:

What are important areas of ongoing research and current evidence gaps in research on suicide prevention in Veterans and military personnel, and how could they be addressed by future research?