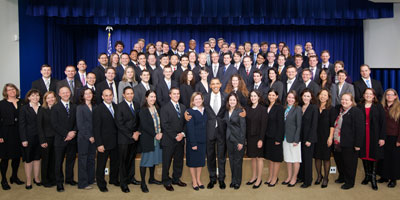 Rachel Werner, MD, PhD, a Research Career Development Awardee with the VA HSR&D Center for Health Equity Research and Promotion (CHERP) and a primary care internist at the Veterans Affairs Medical Center in Philadelphia, has been named a recipient of the Presidential Early Career Award for Scientists and Engineers (PECASE).

Dr. Werner's research focuses on how quality improvement initiatives—such as pay for performance and public reporting—change health care delivery, health care organization and finances, racial disparities, and overall quality of care. Her work was among the first to recognize unintended consequences of public reporting of quality information, which in some cases may worsen racial disparities.

Dr. Werner's work has been recognized through numerous awards including the John D. Thompson Prize for Young Investigators from the Association of University Programs in Health Administration, and Article of the Year Award from the Society of General Internal Medicine for her Journal of the American Medical Association article on the relationship between measured performance and mortality rates in hospitals.

In addition to Dr. Werner, Pamela J. VandeVord, PhD, of VA Office of Research and Development's Rehabilitation Research and Development Service, received a PECASE award for her work that is focused on how traumatic brain injury damages neurons and tissues in the human brain. Dr. VandeVord's work may potentially help injured troops recover sensation in their hands and feet. Dr. VandeVord is a rehabilitation investigator at the John J. Dingell VA Medical Center in Detroit and is an associated professor of biomedical engineering at Wayne State University.

Established in 1996, PECASE is the highest honor bestowed by the United States government to outstanding scientists and engineers beginning their independent careers. The award is given annually by the White House Office of Science and Technology Policy; it recognizes preeminent young scientists and engineers for their innovative research and their "exceptional potential to shape the future through intellectual and inspired leadership."

Drs Werner and VandeVord received their PECASE awards and were honored by President Barak Obama at a White House ceremony on December 13, 2010. To learn more, read the White House press release.