Catheters are a major source of patient infection. HSR&D-funded studies identified barriers to adopting key infection prevention practices. National implementation of best practices at VA and private US hospitals has led to a breakthrough in improved patient care.

Part of HSR&D’s Center for Clinical Management Research (CCMR) in Ann Arbor, MI, Sarah Krein PhD, RN, and Sanjay Saint, MD, MPH earned the 2017 HSR&D Health System Impact Award for their scientific and operational efforts to make Veterans’ care safer by reducing the harms associated with overuse of  urinary catheters. Their work has significantly changed practice across VA – and has driven changes in urinary catheter practice in the U.S. private sector and around the world.

Epidemiologic data have revealed that, rather than a simple convenience in caregiving, indwelling urethral catheters (commonly known as Foley catheters) are a major source of iatrogenic infections—putting patients at risk. Dr. Saint, funded in part through a VA HSR&D Career Development Award, was the first to:

Drs. Saint and Krein teamed up to lead their pioneering HSR&D-funded study to identify barriers and facilitators to the use of key infection prevention practices in U.S. hospitals. This research reinforced the need for a “Bladder Bundle” to reduce catheter-associated urinary tract infection (CAUTI). This bundle of activities, which was first successfully implemented throughout hospitals in Michigan, focuses on multiple ways to decrease the use of urinary catheters, with an emphasis on continual assessment and catheter removal as soon as possible, and to increase the use of recommended infection control practices.

Drs. Saint and Krein then assisted VA’s National Center for Patient Safety (NCPS) in developing its VA CAUTI Breakthrough Series. CAUTI rates fell from 2.37 per 1,000 catheter days before the program to 1.06 per 1,000 catheter days during implementation. The success of the Bladder Bundle resulted in its national implementation – in more than 1,000 hospitals – through the support of the Agency for Healthcare Research and Quality (AHRQ). CAUTI rates fell by 32% in participating general medical and surgical units.  A follow-on AHRQ-funded study, guided by Drs. Saint and Krein, focused on CAUTI reduction in both community-based nursing homes and VA Community Living Centers, and CAUTI rates in community-based sites decreased by a remarkable 54% during that initiative.

An article in The New England Journal of Medicine describes the results of a program to reduce CAUTI in hospitals, which was based on Drs. Saint and Krein’s work, coupled with the national AHRQ Comprehensive Unit-based Safety Program (CUSP).  This article highlights the findings from the first 4 cohorts of the program (926 units from 603 hospitals in 32 states, the District of Columbia, and Puerto Rico), although the collaborative was eventually implemented in more than 1,000 hospitals in 42 states with similar findings. Another article in Infection Control and Hospital Epidemiology, co-authored by Drs. Saint and Krein, compares infection prevention resources and practices between VA (n=47) and non-VA nursing homes (n=306) from 41 states participating in a national program sponsored by AHRQ to reduce CAUTIs in nursing homes. Results of this study were cited in 37 news outlets, including the fact that VA nursing homes reported more hours/week devoted to infection prevention-related activities (31 vs. 12 hours).  Most recently, Drs. Saint and Krein led an HSR&D funded project that underscores the importance of also focusing on the non-infectious harms of urinary catheters as an avenue for further improving care for patients in both VA and private US hospitals, with findings from this work published in JAMA Internal Medicine. 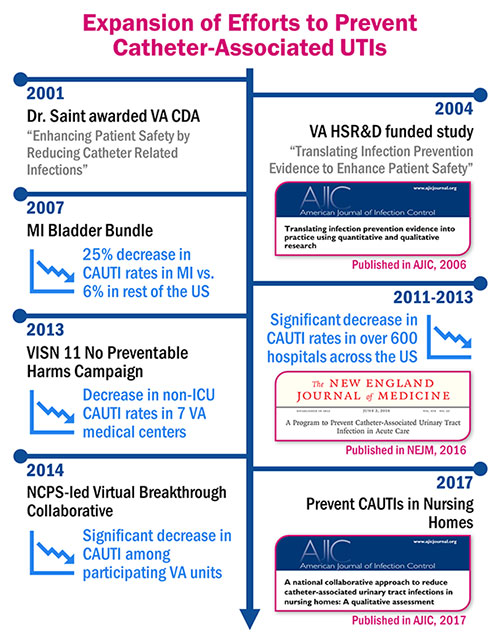