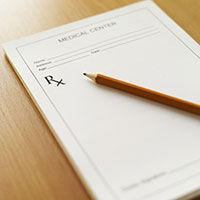 Research conducted by several VA/HSR&D investigators was instrumental in the development of new guidelines to help providers determine when and whether to prescribe cholesterol-lowering medications for their patients. Instead of basing this on a patient's low-density lipoprotein (LDL) level–the "bad cholesterol that can lead to heart attack or stroke–new guidelines suggest that providers calculate their patient's risk of having a heart attack over the next 10 years based on several factors that include: age, cholesterol levels, blood pressure (BP) and BP medication use, diabetes status, and smoking status. The new guidelines leave behind the long-standing belief that providers should treat their patients with cholesterol-lowering medications, like statins, until cholesterol levels are considered normal.

The new strategy of tailoring treatment to individual patients is something that has long been advocated by VA/HSR&D researchers, including Drs. Rodney Hayward, Tim Hofer, Sandeep Vijan, and Yale colleague, Harlan Krumholz, in a series of articles and editorials that have appeared in Circulation: Cardiovascular Quality and Outcomes and the Annals of Internal Medicine, to name a few. These investigators were the first to state that there was no scientific basis to support treating to LDL targets, nor was the safety of treating to LDL targets proven. They conducted research demonstrating that tailored treatment would be a simpler, safer, more effective, and more evidence-based approach to improving the care of patients with higher LDL levels. Other VA researchers and leaders, such as Drs. Eve Kerr, Len Pogach, John Rumsfeld, Steve Fihn and Joe Francis were quick to advocate that VA guidelines and performance measures begin to focus more on using statins in high-risk Veterans, and focus less on LDL treatment targets, years before the recent national recognition of this important evidence.

Released on Tuesday, November 12 by the American Heart Association and the American College of Cardiology in Circulation, the new guidelines have been widely publicized in The New York Times, The Washington Post , CNN Health, and other media outlets.